a week of women 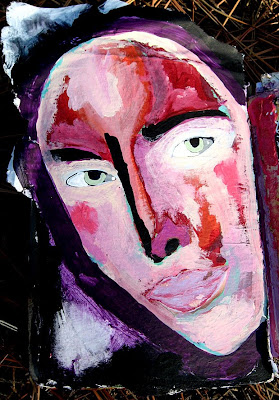 one of the first things that i did last week was paint over a face that i'd torn out of a magazine. i'd read about the exercise in randi feuerhelm-watts' "wide open" and was anxious to start... 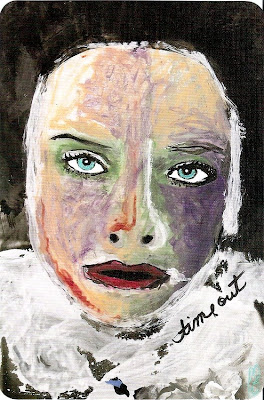 this is randi's example -- doesn't it just make you wanna give it a whirl?! the idea is to separate the face into sections of light and dark, painting the lighter areas first, paying attention to shades and shadows. right then. i marked the sections off with a permanent marker and had at it... not!! all i can say is that the process resembled (something like) patting my stomach and rubbing my head at the same time. i could NOT get it -- the model looked like she'd contracted a weird but very colorful skin disease. after a half hour or so i decided that i could either a.) paint the entire page white and do something else, or b.) forget about what i was supposed to be doing and intuitively pick up colors and paint. i went with 'b' and within seconds i couldn't stop painting -- i KNEW where i wanted everything to go. 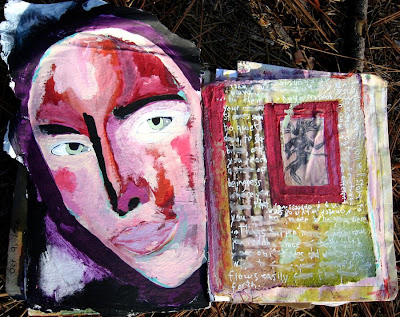 i learned a lot about acrylics and layering doing this. it's hard to describe, but somehow it gave me a sense of how bottom layers peek through even though you don't intend it to happen when you're painting later layers. which sounds really elementary, but somehow doing this really made me get it. 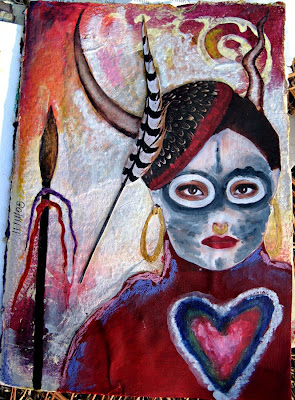 then i went back to a page that i started in virginia but never finished. i gave it a couple of coats of paint and started over. yeah, she was wearing that hat and feather in the magazine "W" -- irresistible! i'm not quite happy with the page but not feeling like i want to hang around and fuss with it either. 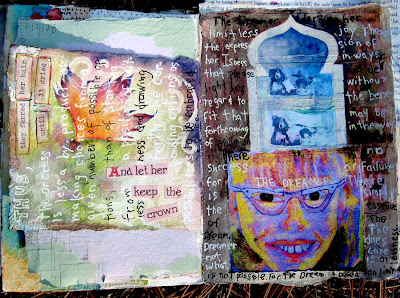 then i painted the page opposite 'the dreamer'. half of this journal is made with st. armand watercolor paper, and half with arches 140# rough watercolor paper. this is a st. armand page... i can hardly resist painting with watercolors on this paper because it's a dream to paint on. 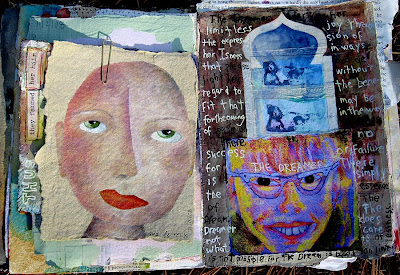 what? who's she and what's she doing here?! 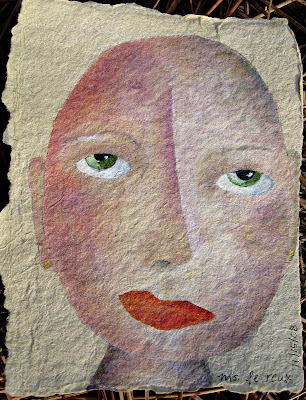 it's ms. le reux... i have a feeling she was sent by virgo incorporated (or some such agency) to keep an eye on those crazy colorful women... what's that you say? lynne used colors with names like 'wine and roses', 'bolivian blue', and 'english lavender' for your skin alone? pfffft. you're not so virgo, ms. le reux...

about the paper ms. le reux is painted on... roxanne gave me two pieces of heavy beige watercolor paper that originally belonged to her mother. it was was pure joy to paint on and had the sweetest energy... thank you, roxanne!