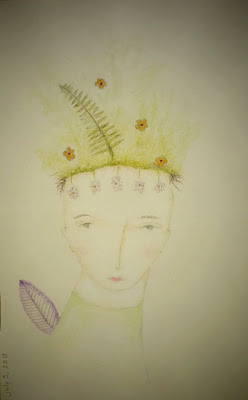 'fern' is the theme of this week's drawing challenge - hosted by norma, and since my going on and on about a giant fern i saw is one of the reasons norma chose this theme, i wanted to participate...

it was in early july that i told her i'd just seen a *huge* fern - i don't remember the overall reason for our correspondence at the time, but i do remember that when i told norma about the fern she was, well, norma...   she responded to my excitement as if she herself had seen the giant fern!  we wrote back and forth about it  three or four times! 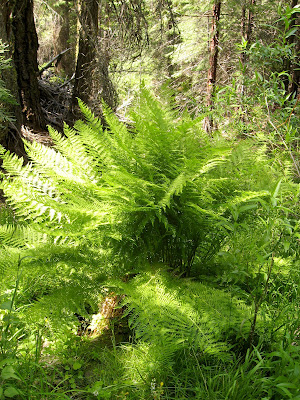 now, exactly one month later, it seems like lifetimes ago that i came across that fern on one of my wanders.   here it is in all of its fern glory (not that my picture even begins to capture it);  if i were standing next to it we'd be about the same height - a little over five feet tall. 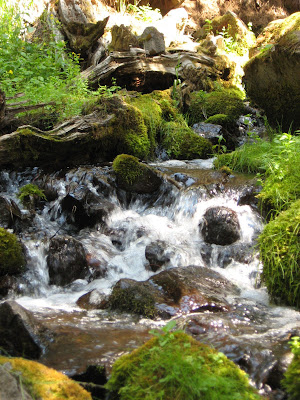 i found it one day when i was walking up this stream, which is one of the headwater streams of the creek that i live on.   we have a lot of water here - and a lot of mossy rocks like the ones in this pic, but because the relative humidity is so low there are very few ferns.  there are some, but they're not very tall or robust.   this is, after all, considered to be high desert.

if you've been exploring an area for 15 years and have never come across a fern of any size, and then one day you see one that's more than 5' tall, believe me, it gets your attention.   you can hardly believe your eyes.  you feel it may be the most wondrous thing you've ever seen in your life... 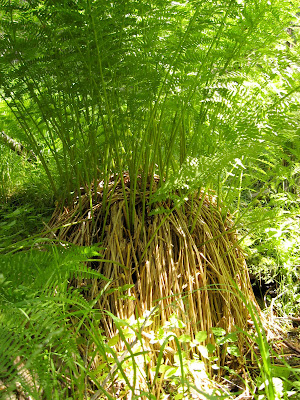 the pedestal the fern sits on;  it's formed from the previous years growth and is about a foot tall.... 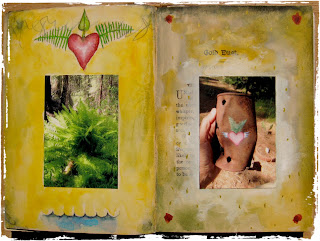 the 'fern pages' in my daily book.   i drew on the can here at home and took it back to leave at the fern a couple of days later.  the deer flies were way too intense there to sit and draw.

i think i'll visit it once more before winter.  i don't want to go too often because the area is a fragile wetland,  but once in a while i'll visit and treat myself to its presence...

for more fern goodness be sure and visit norma ...

All true artists, whether they know it or not, create from a place of no-mind, from inner stillness.”