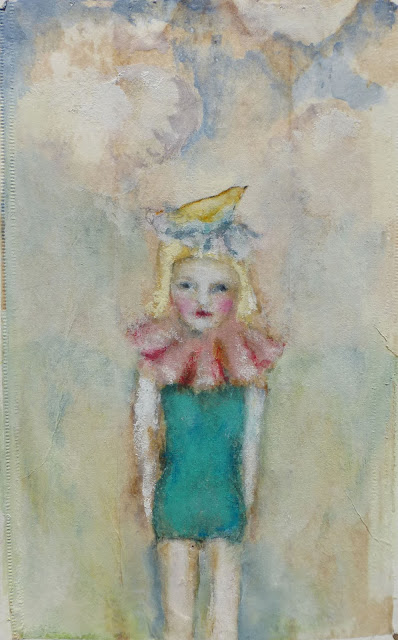 last january i was asked by the documented life project to be a featured artist at the end of october.  it seemed so far away at the time!  interestingly enough, i started painting on teabags again in early october, which fits right in with the theme for the month, 'translucent papers'.   i'm gonna share a project that uses teabags to make prints.  since i'm not someone who likes to work with prompts they  created a very broad prompt for the week - 'just create'! 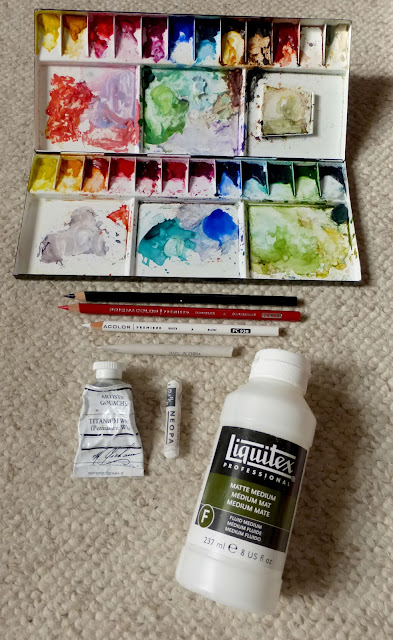 here are the supplies that i used, but  you really don't need more than watercolors and matte medium.

1.  watercolors - this is my big slant well palette which has watercolors in the front section, and gouache in the back.  you don't have to use both - you can use only watercolors, or only gouache.

2.  colored pencils - because they can be helpful on tiny paintings.

5.  blending stump - for spreading the oil pastel around. 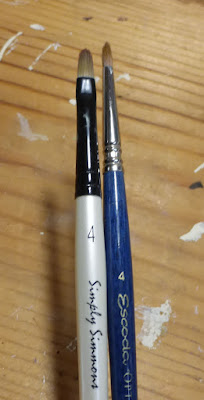 the  brushes that i used for painting...  if you're going to use white oil pastel, don't use your good brushes - the oil pastel will wreck them.

what we're going to do is paint on a teabag and make a print from it.   it's easy and there are no rules...  you could use water soluble oil pastels or caran d'ache neocolor II crayons instead of watercolors! 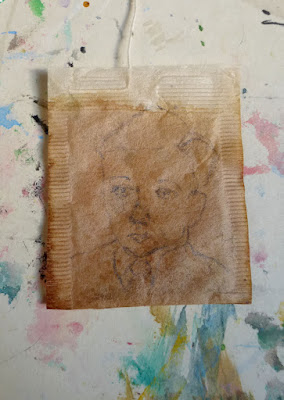 first i drew the face and shoulders - i dressed him in a jacket and tie.   i used an 8B pencil because it shows up well.  i've found that it's good to keep things simple, partly because you're working on such a small surface, and partly because tiny details are probably not going to show up once you make the print. 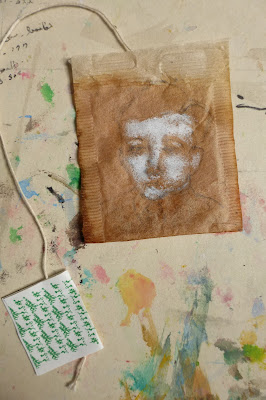 here's what the teabag looked like just after i put white oil pastel on his face.  for places i couldn't get to with oil pastel and a blending stump, i used a white colored pencil - i like prismacolors because they're soft. 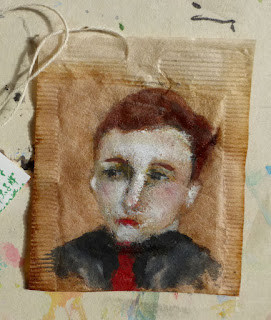 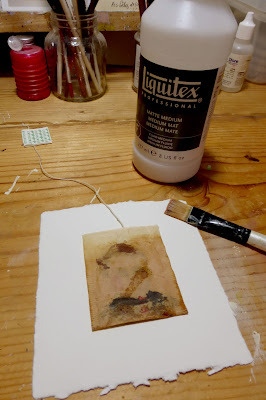 next i laid the painting face down on a piece of paper.  i used some 100% cotton printmaking paper that i had - you could also put it face down on a page in your journal. 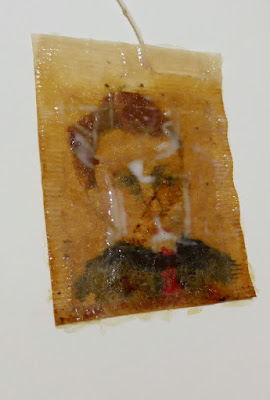 here i've  squirted liquid matte medium on the back of the teabag, and spread it around/mushed it in (with a 1/2" flat brush) until the teabag is completely saturated with matte medium.  i haven't used matte *gel* medium for this, but i'm pretty sure it would work as well.

when you're sure that the teabag is saturated with medium, carefully lift it up and lay it on another piece of paper (or on a journal page).  as you'll see, some of the paint from the original will have been transferred to the other piece of paper and you'll have a print.

i gently pressed the teabag onto another piece of paper - all that matte medium glued it in place.

now let both the teabag and print dry. 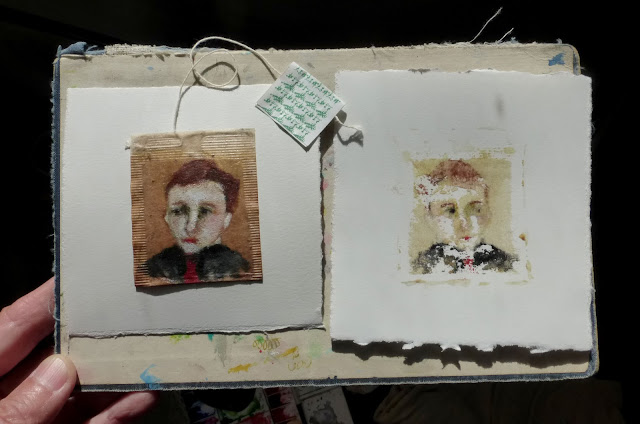 this is what the original and the print looked like just after i picked up the teabag...  the original looks like it did before i made the print; you never know! 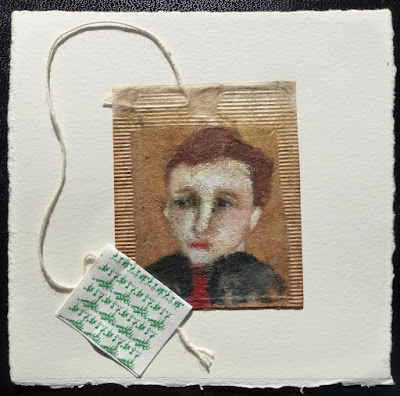 after the teabag was dry i added a bit of red watercolor to his lips, and white gouache to his skin to bring back some highlights.  i glued the tag down so it wouldn't flop around. 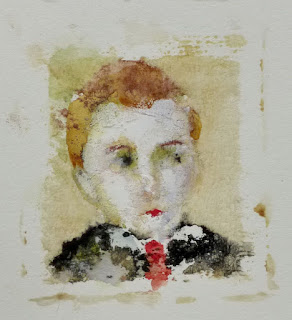 this is the print after i added more white oil pastel  and gouache to his face, and watercolors here and there.  i just messed around with him until he felt done... 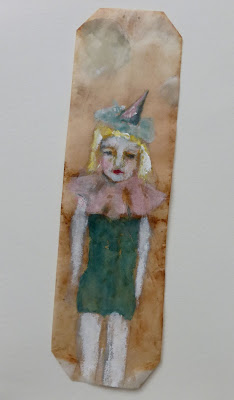 now an example of a teabag that can be opened up...  everything's the same, except opening the sides of the teabag after you paint it.   or you could open the teabag first and then paint it! 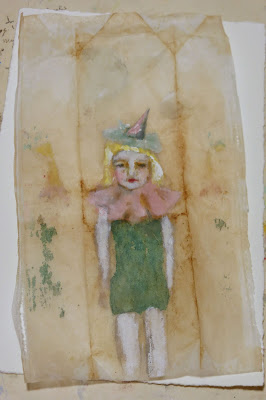 after i opened the teabag... 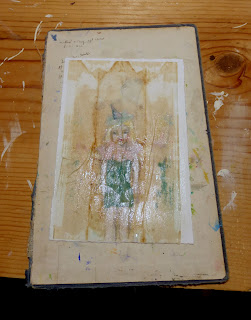 laying face down with matte medium slathered on the back.  i carefully pressed down with the flat brush all over the teabag to make sure the medium had soaked through everywhere. 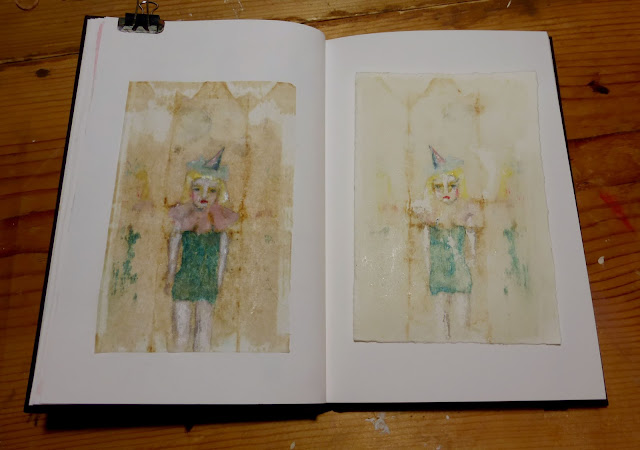 the original on the left (i pressed it onto a page in my 'daily book') and the print on the right.  the print is on a 4" x 6" piece of paper that i later stuck in my 'pochette', along with james and his younger brother. 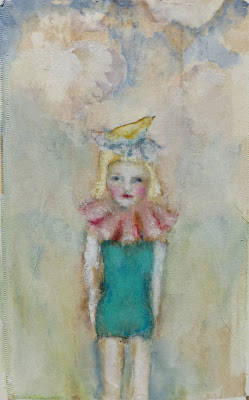 the teabag/original after i added more oil pastel, watercolors, and colored pencil...  i covered up the hat with ivory acrylic paint because it seemed like she needed a bird on her head instead of a hat.  : ) 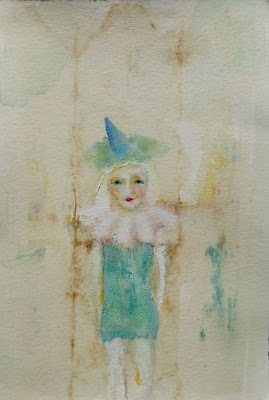 the print after i messed around with it. 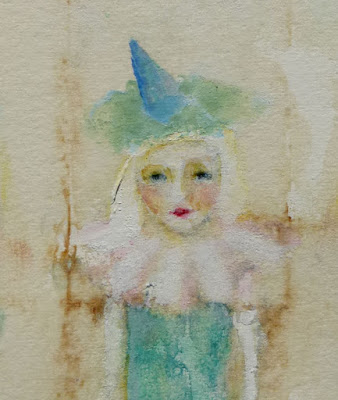 so you can see more detail...  i put white oil pastel on her skin, and then added watercolors.  i used the black colored pencil to bring a little definition to her eyes...  she's pretty crazy looking, but she seemed to wanna stay that way.

i think my favorite thing about doing this is that it's an easy way to start two paintings, which may or may not end up looking like each other.   somehow the print usually ends up looking like the alter ego of the original. 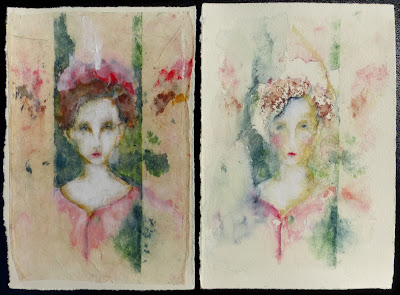 another teabag painting (on the left) and its print...

i hope you have fun with this!  please feel free to ask questions in the comment section or via email!

“If I paint my dog exactly as he is, naturally I would have two dogs, but not a work of art.”