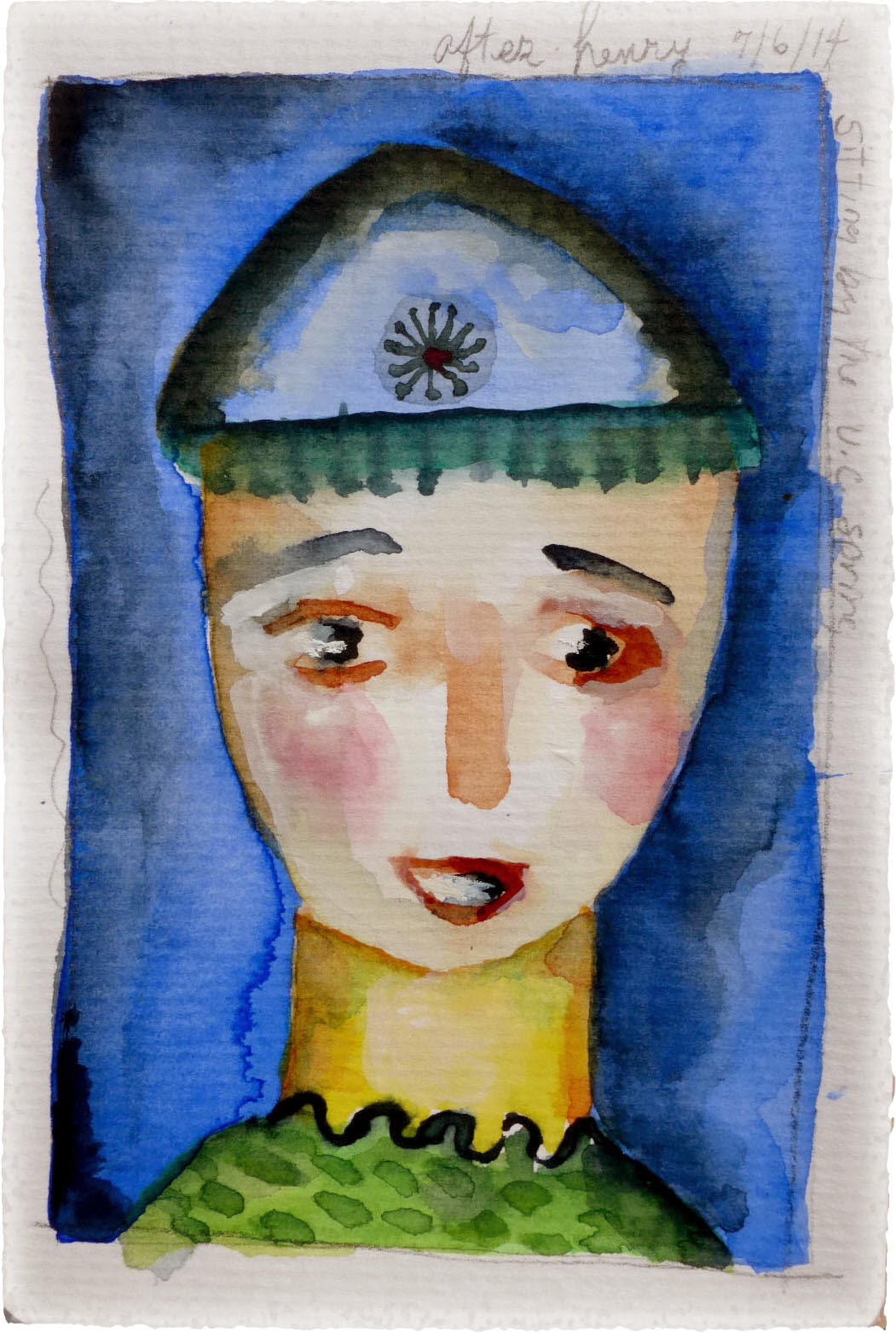 this post is in support of Erwin Lian Cherngzhi's  kickstarter campaign...   Erwin is a sketcher who wants to create The Perfect Sketchbook.   his perfect sketchbook is 3 1/2" x 5 1/2", contains 60 pages of 140# saunders waterford 100% cotton coldpressed watercolor paper, and lays perfectly flat when open.   it also has lots of other great features that you can read about on The Perfect Sketchbook website. 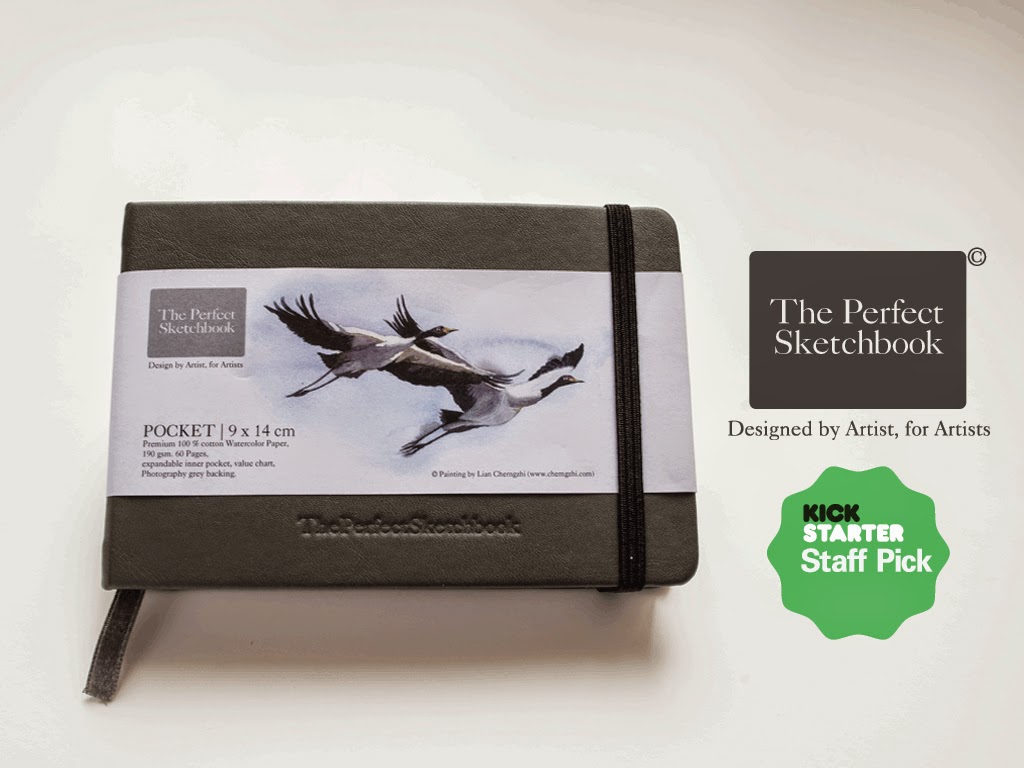 as of today there are six days left in his kickstarter campaign, and i'd like to see him meet his goal because i want to paint in The Perfect Sketchbook! 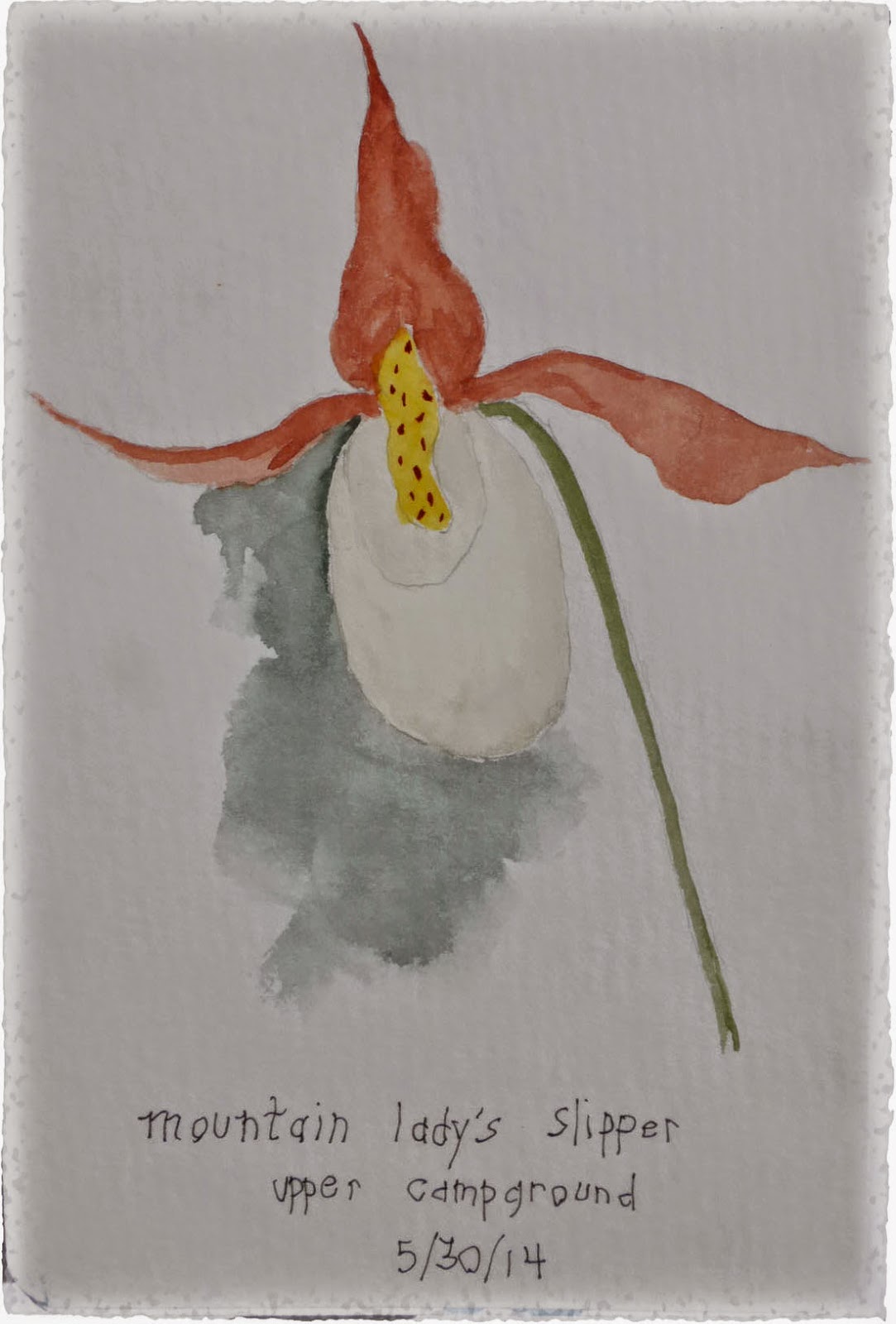 the pics in this post were not painted in one of erwin's perfect sketchbooks, but  in a 3 1/2" x 5 1/2" watercolor book that was given to me last spring. 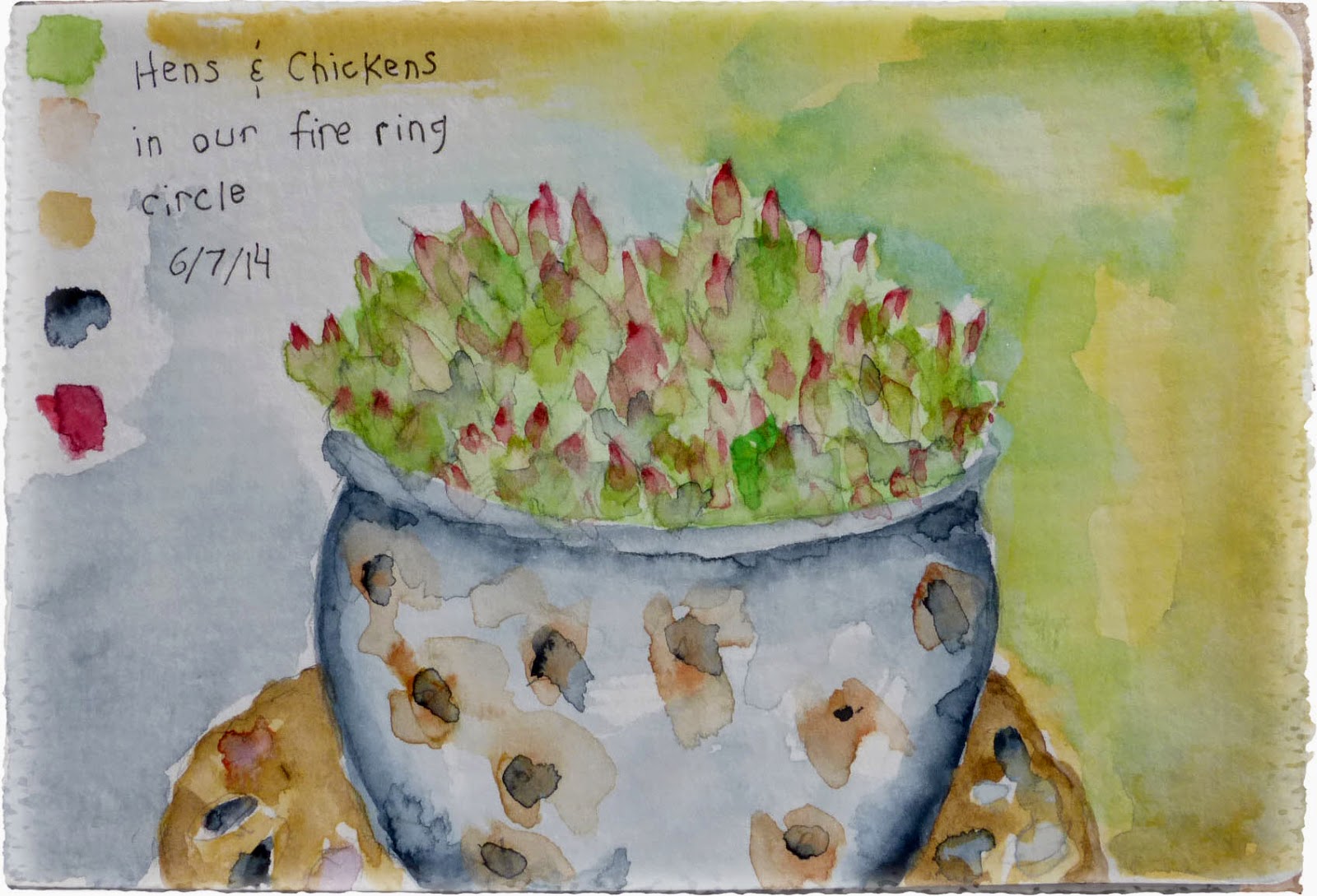 i've had a blast painting in it and only have six blank pages left.  these are some of my favorite pages... 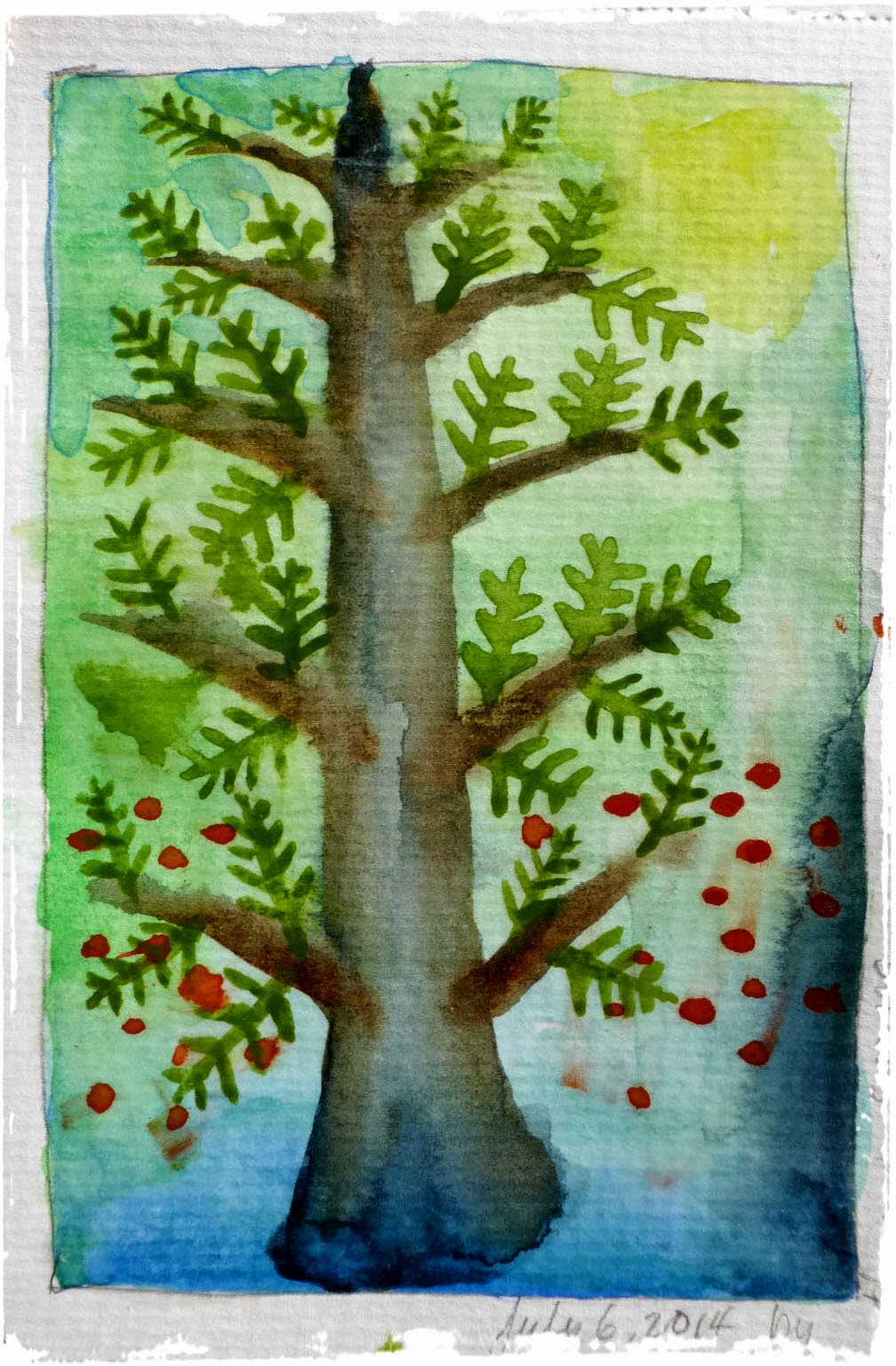 most of the paintings are *not* realistic, 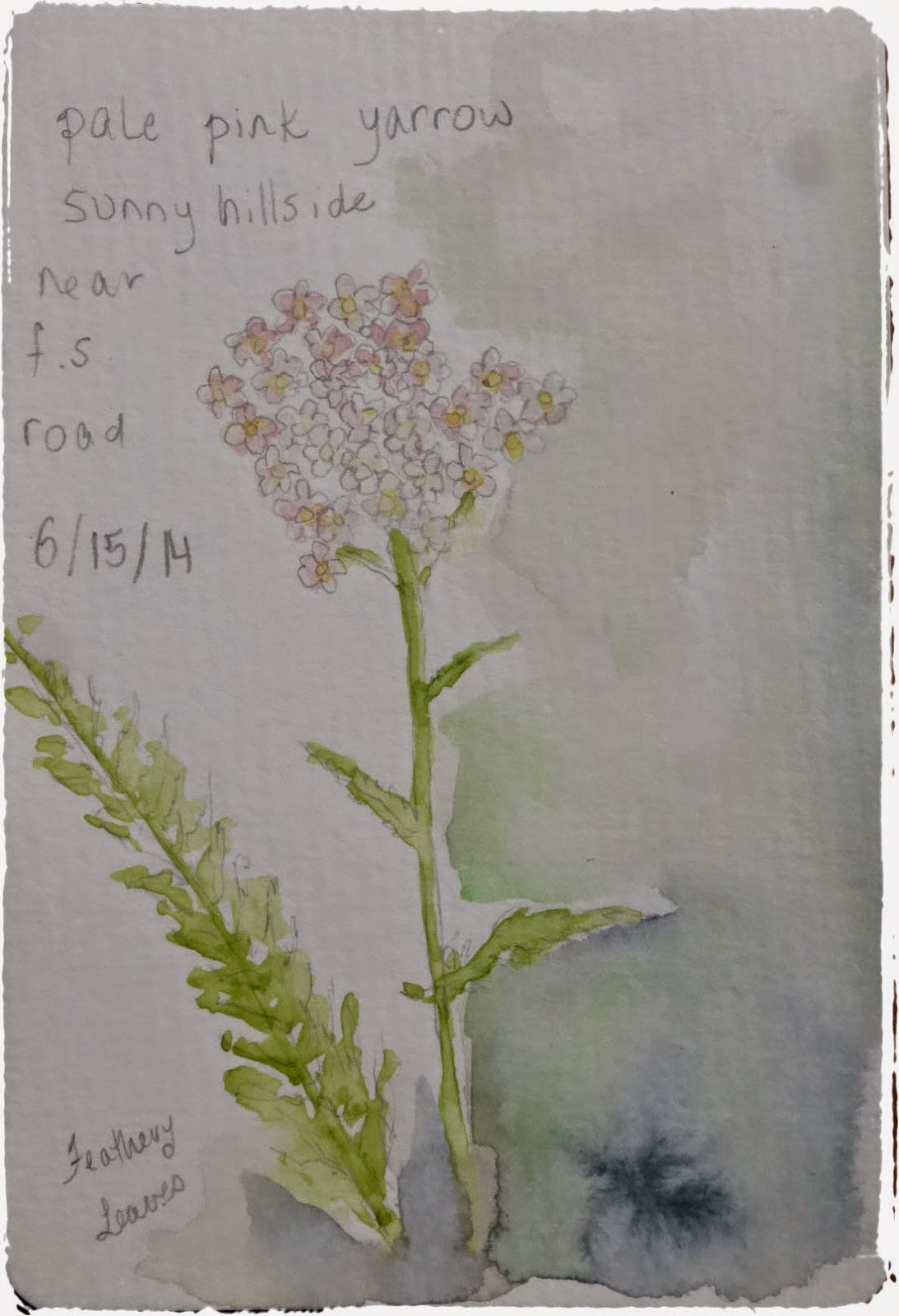 but some are.  i feel like i've learned a lot about painting outside; i have increased respect for those who paint 'en plein air'!  for instance a strong wind always seems to come up when you decide to paint wet on wet, and i am amazed at how fast water dries on paper. 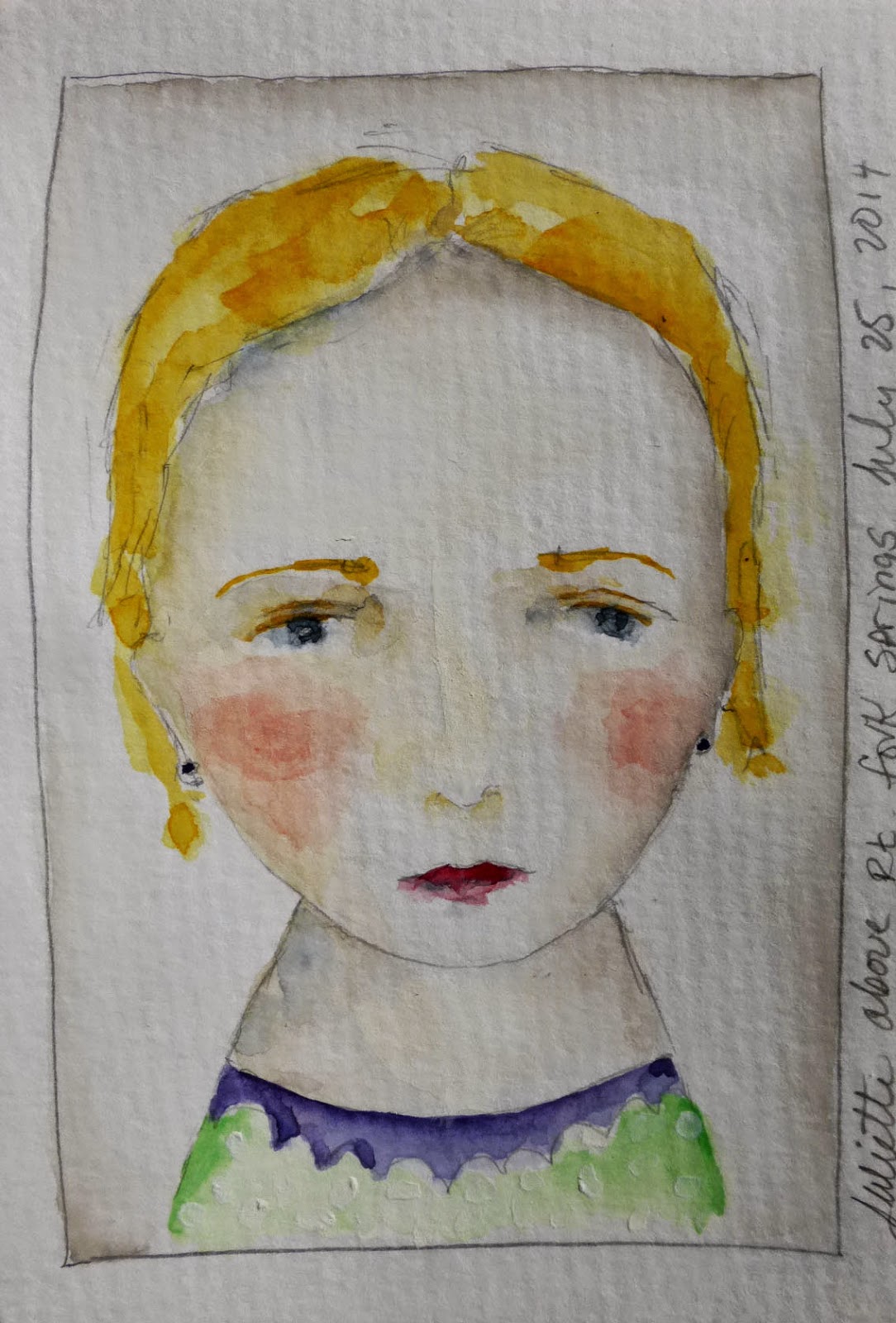 i wanted to make juliette a little less serious, but nope.  all of the sudden mosquitoes were bearing down on me, so serious she stayed!   i only paint in this book when i'm outside, and i always leave the paintings as they were when i shut the book.  i don't fix them up at home... 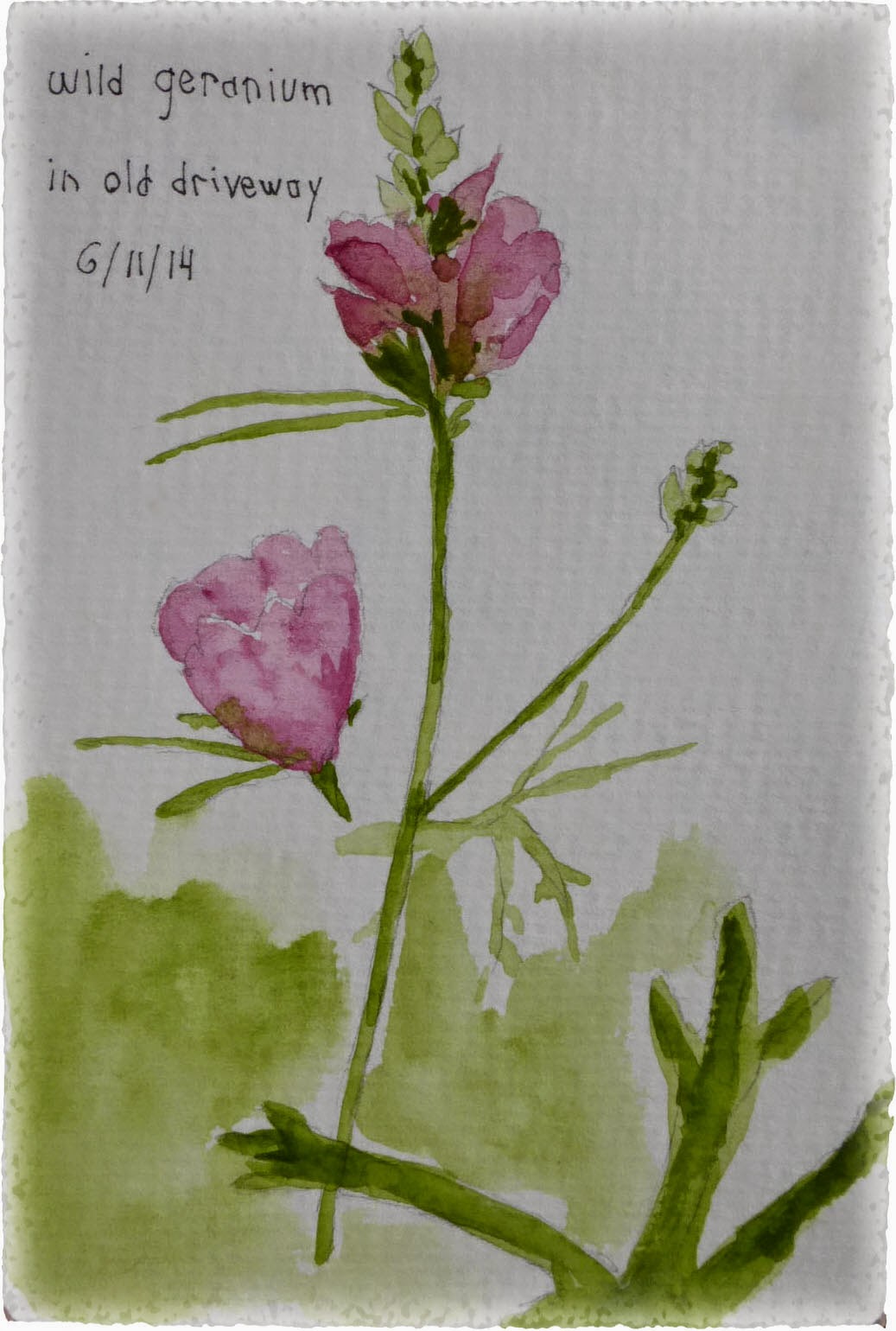 probably my favorite thing is smearing paint around in the background, and i can get way too carried away with this.  but it's so much fun. 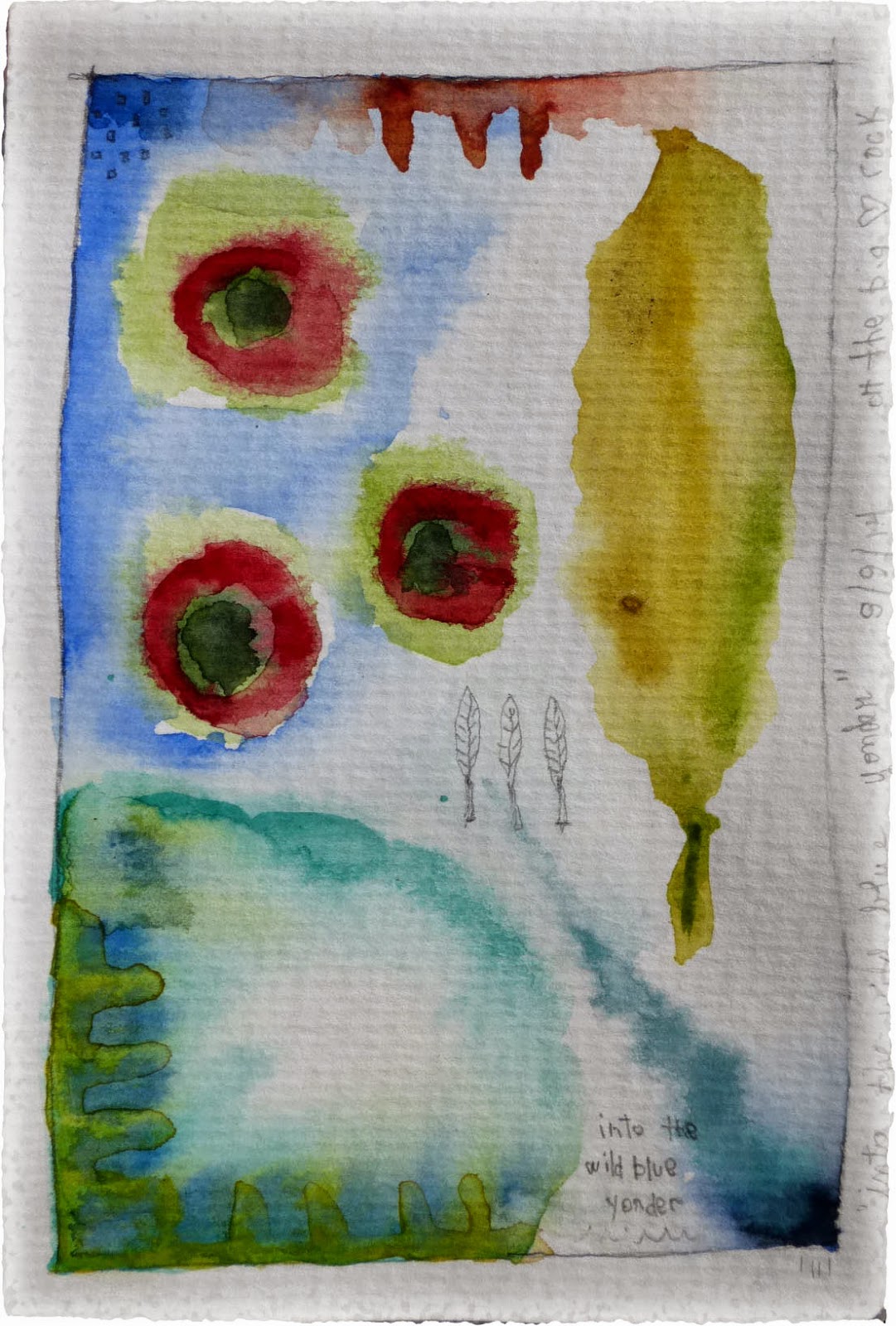 lately i've been doing paintings like this...  whoa!  really fun! 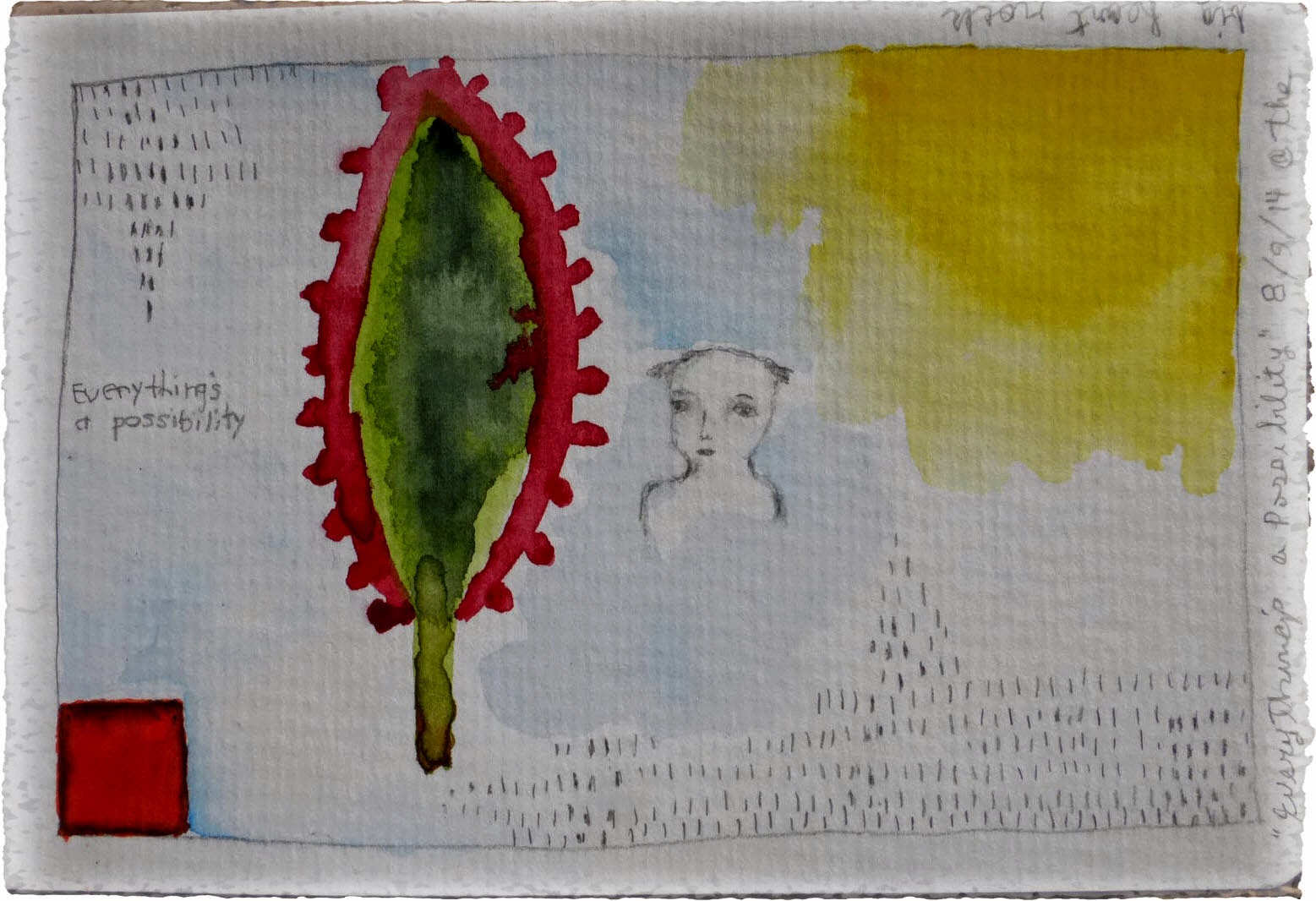 this little book was given to me by kathy dorfer, who brought it back from italy for me.   thank you, kathy... 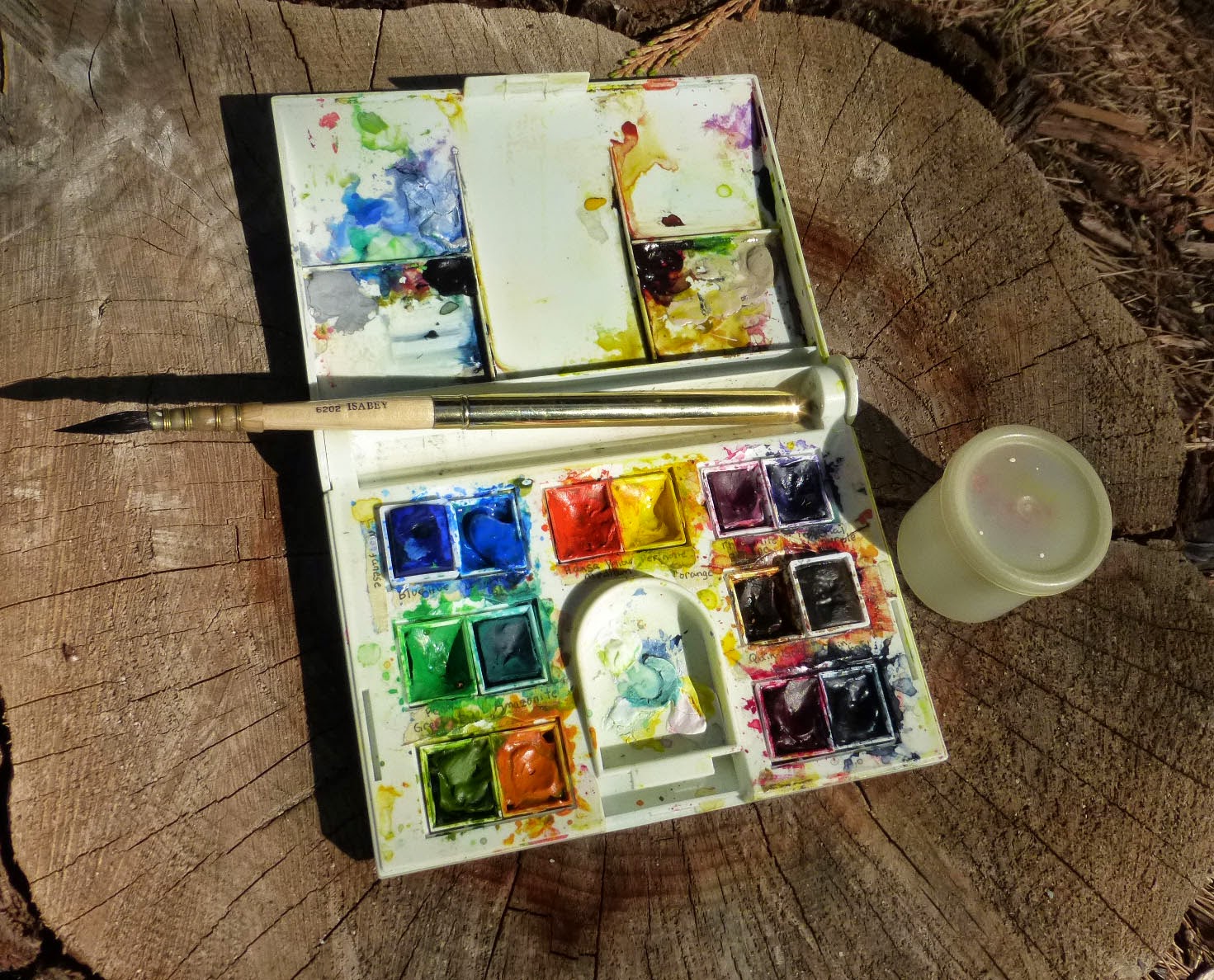 everything i use (except the pencil)...   it's a cotman watercolor set that i took the paints out of years ago, and replaced with daniel smith watercolors.  the brush is an isabey travel brush.

but back to erwin's kickstarter campaign!   if you think he's on the right track with his sketchbook i hope you'll consider supporting him.   a $25 pledge means that you'll receive a sketchbook sometime in december,  but you can contribute as little as $1...

When Van Gogh was a young man in his early twenties, he was in London studying to be a clergyman. He had no thought of being an artist at all. He sat in his cheap little room writing a letter to his younger brother in Holland, whom he loved very much. He looked out his window at a watery twilight, a thin lampost, a star, and he said in his letter something like this: “it is so beautiful I must show you how it looks.” And then on his cheap ruled note paper, he made the most beautiful, tender, little drawing of it.

When I read this letter of Van Gogh’s it comforted me very much and seemed to throw a clear light on the whole road of Art. Before, I thought that to produce a work of painting or literature, you scowled and thought long and ponderously and weighed everything solemnly and learned everything that all artists had ever done aforetime, and what their influences and schools were, and you were extremely careful about *design* and *balance* and getting *interesting planes* into your painting, and avoided, with the most astringent severity, showing the faintest *academical* tendency, and were strictly modern. And so on and so on.

But the moment I read Van Gogh’s letter I knew what art was, and the creative impulse. It is a feeling of love and enthusiasm for something, and in a direct, simple, passionate and true way, you try to show this beauty in things to others, by drawing it.

And Van Gogh’s little drawing on the cheap note paper was a work of art because he loved the sky and the frail lamppost against it so seriously that he made the drawing with the most exquisite conscientiousness and care.

~ Brenda Ueland, If You Want to Write: A Book about Art, Independence and Spirit  (via tumblr)